You are watching: How to understand and trade the bond market in higherd.org
By Michael J. McFarlin

Although the stock market is the first place in which many people think to invest, the U.S. Treasury bond markets arguably have the greatest impact on the economy and are watched the world over. Unfortunately, just because they are influential, doesn’t make them any easier to understand, and they can be downright bewildering to the uninitiated.

At the most basic level, a bond is a loan. Just as people obtain a loan from the bank, governments and companies borrow money from citizens in the form of bonds. A bond really is nothing more than a loan issued by you, the investor, to the government or company, the issuer.

For the privilege of using your money, the bond issuer pays something extra in the form of interest payments that are made at a predetermined rate and schedule. The interest rate often is referred to as the coupon, and the date on which the issuer must repay the amount borrowed, or face value, is called the maturity date.
One wrinkle in the equation, though, is that not all debt is created equal with some issuers being more likely to default on their obligation. As such, credit rating agencies evaluate companies and governments to give them a grade on how likely they are to repay the debt (see “Good, better, best”).

Benji Baily and Delmar King, fixed income investment managers at Everence Financial, say ratings generally can be classified as investment grade or junk. “Anything that’s considered to be an investment grade, you would have a fairly high probability that you’re going to get your money back at maturity,” King says. “Of course, the lower you go down the credit spectrum, the more risk there is of default and the possibility that you could have losses. Therefore, the lower the security grade you have, the more yield compensation you should have for taking that default risk.”

Rather than hold a bond to maturity, they also can be traded. But, as a bond is traded, interest rates can change, so the overall value of the bond can change. “If you bought a bond that has a 10% coupon and the rest of the market is fine with owning a 1% coupon, then someone is going to love to have that 10% coupon until maturity,” Baily says. “Conversely, if you have a 1% bond and everyone else is expecting that the market in general will be at 10%, then you’re going to need to pay someone a lot of money to take that 1% bond instead of buying a new 10% bond.”

Because coupon rates generally are fixed, to adjust for future expectations the price of the bond or note has to move up or down. If yields, the interest or dividends received on a security, go up, the price will fall to accommodate that higher yield; if yields go down, then price has to go up.

Given bond characteristics, there are a number of reasons they may be attractive for active traders. Depending on what is important, the bond markets offer liquidity, portfolio diversification and even attractive trading hours.

The U.S. Treasury futures market is one of the most active and liquid markets in the world (see “A deep well,” below). “The Treasury market is gigantic. It’s extremely liquid; it’s a great place to hide. It’s an easy place to buy into or get out of because bid-ask spreads are very narrow,” Baily says. 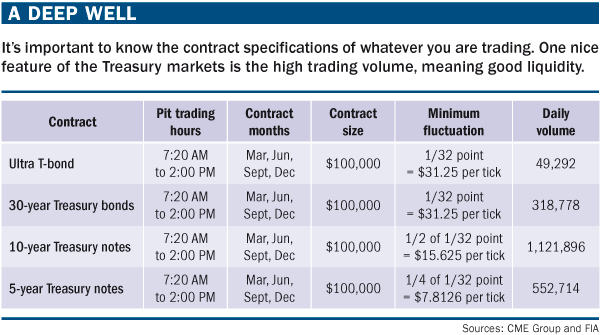 The U.S. Treasury futures market is one of the most active and liquid markets in the world (see “A deep well,” below). “The Treasury market is gigantic. It’s extremely liquid; it’s a great place to hide. It’s an easy place to buy into or get out of because bid-ask spreads are very narrow,” Baily says. 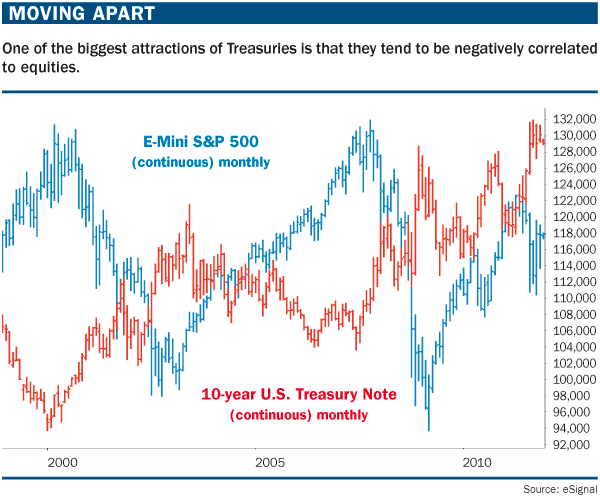 Be careful, though, because this inverse relationship is not as reliable as say, gold and the dollar.

Finally, the bond trading hours are attractive for two reasons. First, the bond pits are open when most of those major reports come out and second, it’s fairly easy to determine the most active trading times of the day.

“One of the nice features of bond trading is that the bond market is open when almost every report hits,” says Jack Broz, founder of TradeBondFutures.com.

This is important because the bond market is a measure of interest rates, which are determined by economic conditions, so economic reports, especially those that measure the economy and inflation, drive the market. Broz recommends waiting for the markets to digest news first. “There’s a huge list of reports. But, as a bond trader, you’re not going to try and predict reports, or compete with the Goldmans and Citigroups by guessing what the number will be and how it’ll move the markets, because that’s not going to work,” he says. “It’s like being in a minefield. If you get yourself flat and then react to the report, more times than not you can figure out where it wants to go from there.”

Because of the nature of the market, bond activity typically is easy to track throughout the day. “You have certain periods of that day that are more active than other parts of the day,” says Earl Spencer, trading manager of treasuries and securities at HTG Capital Partners. “You come in in the morning and the market will trade reasonably actively until basically 10:30 in the morning, which is when Europe closes. Then you hit a stagnant patch and [then it gets more active] around 1:30-2:00 p.m.”

The major Treasury contracts, five- and 10-year notes and 30-year bonds, are based on a 6% coupon rate equaling par or 100-00. So is the ultra-bond, which is a 30-year bond that has at least 25 years left to maturity. Each full tick is worth $31.25; there are 32 ticks in a point or handle, equaling $1,000 per contract. Five- and 10-year notes also have 32 ticks in a point, but each tick is subdivided. The 10-year is traded in half-ticks with each half-tick worth $15.625, and the five-year is traded in quarter-ticks with each quarter-tick worth $7.8125. Because longer-term Treasuries tend to have higher yields, they tend to be more sensitive to interest rate movements. A news event that may cause a full handle move in the long bond typically results in a 16-24-tick move in the 10-year and less than a half-point move in the five-year.

Broz offered two pieces of advice to beginning bond traders: Start with five- and 10-year notes, and trade multiple contracts. “If traders can use a stop of one tick in five-years, two ticks in 10-years, then they can get entry prices you like, and [lower] your risk,” he says. Broz explains that although there may be “less bang for your buck” than in the 30-year, there also is less risk. “You can learn how to get in the market, manage your trade, eke out a few ticks a day. That’s unique because for guys that trade the S&P, that’s not really even an option.”

Additionally, Broz says that trading a second contract helps you protect your profitable trades. “There are too many novices that are told to trade a one-lot. To me, that’s a losing game when that one-lot is a winner and you take profits and it keeps going your way. Now you have nothing on,” he says. “I stress to newer traders that they have to trade a two-lot. With that two-lot working, if the market goes their way one tick, then they can take one off, move a stop to scratch and then who knows what may happen.”

Finally, Spencer says the best tools a bond trader needs are his eyes and brain. “Observe, observe, observe different types of relationships. Bonds don’t trade in a vacuum. You’ve got to be aware of the influences that are out there. If you walk in in the morning and the prices are different than when you left, find out why,” he says.

Getting started in bond trading is just like learning to trade any other commodity. You have to understand what it is you’re trading, and know how and why it moves the way it does. Like any endeavor, you’re not going to be perfect at first.