Update May 13: CCIV shares resumed the downtrend and fell 4.5% on Wednesday, having witnessed a dead cat bounce a day before. The renewed downside momentum drove the stock closer towards the four-month troughs of $17.42. CCIV shared settled Wednesday near the lows of the day around $17.80. The stock tumbled after the Thornton Law Firm alerted investors that a class action lawsuit has been filed on behalf of investors of the company. Additionally, the broader market sell-off on concerns over rising inflation also exacerbated the pain for the CCIV investors. A retest of the multi-month lows remains on the cards.

NYSE:CCIV has been a hot topic among SPAC investors, even as the SEC seeks to institute more regulations around the popular merger vehicle. On Tuesday, CCIV continued its downward descent as the stock fell 0.2% to close the trading day at $18.60. CCIV’s march back to its $10 NAV price has been steady since the stock skyrocketed on the news of its merger with Lucid Motors back in February. Along with other SPAC stocks, CCIV has fallen out of favor with investors as several prominent companies that came public via the SPAC merger have since fallen well below the $10 share price.

Stay up to speed with hot stocks’ news!

Lucid Motors CEO Peter Rawlinson remained noncommittal about the amount of vehicles the company is aiming to deliver in 2022. After revealing that Lucid is targeting the delivery of more than 577 vehicles for 2021, Rawlinson only vaguely submitted that 2022 would see ‘significant growth’ but failed to provide an estimate when further pressed. A number of vehicles delivered would be able to provide analysts with forward looking sales and revenue estimates, which helps to provide a proper valuation for the share price once the merger is completed. 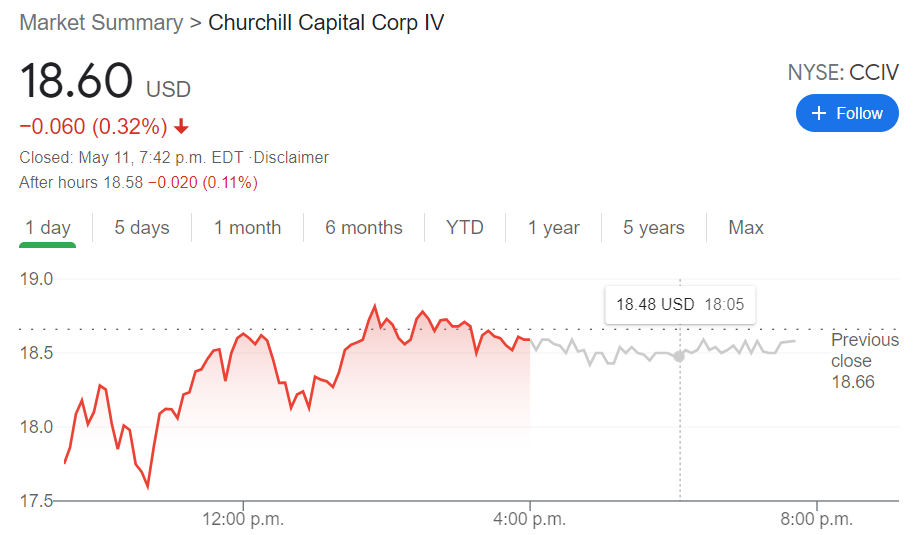 Industry leader Tesla (NASDAQ:TSLA) reported its delivery numbers for the China market on Tuesday, and while many outlets are reporting a drop in sales, the true number remains to be seen. The figure reported was 25,845 vehicles delivered in China in April compared to 35,478 delivered in March, good for a 27% decline. It should be noted that Tesla has said that it focussed on exporting more vehicles that were built at its Shanghai Gigafactory in April than in previous months, so the actual vehicle delivery figures may be skewed.

Update May 12: Churchill Capital Corp IV (NYSE: CCIV) is set to extend its decline, falling below the all-important $18.45 trough recorded on April 20 and tumble close to $18. That would put shares of the SPAC merging with Lucid Motors at levels recorded before the move was announced. Will bargain-seekers jump in? Investors remain concerned about inflation and the potential for rate hikes.